I haven’t mentioned the StarShipSofa for a while – mainly because I am so far behind with my podcast listening at the momement. But the cover for episode 236 is so utterly gorgeous that I shall probably be replacing the desktop walpaper on my netbook before the end of today.

Click on through to see the full size version of the cover and to download the podcast.

Launching, appropriately enough, on Friday 13th (hey, that’s today!) is a new horror podcast called Tales To Terrify. Normally this is a bit of news that would pretty much pass me by – I am already badly behind on my podcast listening, and horror is a genre that I have found myself reading a lot less of in recent years.

However, in this case I shall be making an exception and plugging it into my podcatcher just as soon as I get home. The reason: Tales To Terrify is a sister podcast to the ever-reliable (and award winning) StarShipSofa. When I subscribed to Black Static magazine, a few years ago, I did so entirely because it came from the same publisher as Interzone. This bit of randomness proved to be very successful for me and, in the case, of Tales of Terror, the risk is even lower.

I have a second reason for subscribing immediately. Lawrence Santoro. Again, if you have listened to the StarShipSofa for any length of time, you will have heard Larry’s name bandied around and you will probably have some sense of just how good a writer he is. Larry’s involvement certainly raises my expectations for this podcast.

And finally, the podcast is promising scary character driven horror and I’m in.

Enjoy the rest of your Friday 13th – I certainly intend to.

StarShipSofa 191 is an end of the month edition – which means all new cover art. And one look at the cover has me rushing to start gPodder.

This is promising to be a very good show indeed.

It’s that time of the month again and StarShipSofa #182 comes with artwork. It’s worth visiting the StarShipSofa Main site as well because the monthly cover art is now being used to re-theme the site on a regular (monthly) basis.

The main fiction this month is Circus Town by Will McIntosh and I am looking forward to this one, mainly because I’m pretty certain I’ve already read it. If it is the story I remember (possibly from Interzone, but I’d have to check to be sure), it’s an effective and moving story of an innocent abroad and an engaging take on the idea of a world made strange by limited perceptions.

I’ll be downloading this as soon as I get home tonight, and looking forward to listening to it when I jump in the car tomoroow.

Another month and another StarShipSofa cover. StarShipSofa No 176 has just hit the web and the cover is both disturbingly dark and genuinely creepy. More than anything, it made me think of Dellamorte Dellamore and this is no bad thing.

The podcast has two pieces of main fiction – Galapagos by Caitlín R. Kiernan and Dr North’s Wound by John Dodds.

Check it out. This one is promising to be a good one.

StarShipSofa has managed to build a fine tradition of excellent cover art – much of which would look perfectly at home in some of the better known print magazines – and this month’s outing from Hamilcar Pereira is no exception. It is striking enough to immediately capture my attention and has really piqued my interest in how it ties in to the main fiction from Mary Rosenblum.

When it comes down to it, this is exactly what you want a cover to do.

(With thanks to The One Thousand for the reminder) 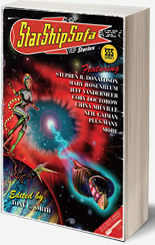 Not only is today 42 Day, it is also the publication date of StarshipSofa Stories Volume 2. This second collection of stories from the Hugo winning podcast includes fiction from a fine collection of excellent writers.

It comes in a variety of editions ranging from an ebook to a limited edition hardback. It really is well worth checking out and I have ordered my copy already.

I have subsribed to, and later unsubscribed from, several podcasts over the past few years. One that I have stuck with, however, is StarShipSofa.

One of the things that keeps this podcast fresh is the willingness of the host, Tony C. Smith, to remain flexible with the format. Whenever someone comes up with an idea, he’ll tend to give it a go and the net result is a constantly evolving show that is always both interesting and entertaining. And it’s evolved a lot.

To give new listeners a sense of just how far it has come, several members of the StarShipSofa community have transcribed some of the earliest shows and the result is StarShipSofa: The Captain’s Logs

These transcripts allow veteran fans and newcomers alike to revisit the wonderful early episodes of StarShipSofa. In these shows, Tony C. Smith and Ciaran O’Carroll paid tribute to the founding fathers and mothers of contemporary science fiction, and some of the big ideas explored in their works, with a delightful blend of humor and enthusiasm and insight that drew loyal listeners from across the globe, myself included.

It is fitting that, while Tony and Ciaran were celebrating the history of the genre, they also were making genre history themselves. Today, StarShipSofa has emerged as a vibrant voice in the world science fiction community. This volume is a testament to the podcast’s origins, as well as to the ongoing power and appeal of science fiction literature.
– Amy H. Sturgis, Ph.D.

Treat yourself. I know I will.

The Hugo Awards are given every year for the best science fiction or fantasy works and achievements of the previous year. As with most awards of this type, there are several categories but what makes the Hugos special within the genre is that they made, determined and adminstered by fans.

Over the past few years, podcasting has become a significant part of this community. Indeed, podcasts such as StarShipSofa and Escape Pod have listenerships that are comparable to the readership of traditional magazines, if not higher. This has led to some discussion (here, here and elsewhere) about the eligibility of podcasts in general and the StarShipSofa podcast in particular.

The podcast communities echo the groups that gathered in the 20s and 30s around such figures as H.P. Lovecraft and pals. They are a shadow of the “Futurians,” a group of science fiction fans-cum-writers-cum-agents and editors-cum-publishers who formed the soul of the Golden Age of Science Fiction of the 40s. People such as Isaac Asimov, Damon Knight, Virginia Kidd, Judith Merrill, Frederik Pohl, Donald A. Wollheim, James Blish, Jack Gillespie, Cyril Kornbluth and others were the Futurians.

I emphasize again: these core groups, communities certainly, families if you will, gathered in single cities or in regions. Some outlanders, such as Ray Bradbury who, though born in the Midwest, grew up on the West Coast, speaks of making the epic road trip from LA to New York, to meet with the members of the Eastern fraternity, the Futurians. They gathered, hung together, drank and sang songs together over kitchen tables and, together and apart, made some great literature in the wake of their communalizing (you might also want to have a read at: http://jophan.org/mimosa/m29/kyle.htm).

The pace is quicker now. With StarShipSofa, Escape Pod and the like, the community happens globally. While the community of the StarShip isn’t necessarily as personal as the Futurians’, it is moving things at a faster pace.

What is happening here, on-line, may not spark as many marriages, divorces, pregnancies, as did the communities of the past, but the voices that are coming out of these little internet tubes are beginning to change the form of fiction-making. One might even say, what is happening here gets back to the root of writing: the telling of stories around a fire.

I think the Hugos need to take a good look at the podcasts and begin to honor those in the medium.

Matthew Sanbourn Smith, Amy H Stugis and Jason Sanford have all also made excellent cases for using the Hugos to recognise how much the various science fiction podcasts have achieved, and for nominating StarShipSofa in particular.

If you are a member of the World Science Fiction Society bear in mind that a podcast is essentially an audio fanzine and would, therefore, probably fit in the Best Fanzine category. Nominations are open now and close on March 13th.

Recognise your favourite podcast and give StarShipSofa a Hugo.

Spider Robinson is an American born SF writer, now living in Canada. He has a generous attitude and his writing can be described as being both humanistic and humorous and plenty of examples of it can be found in the archives of the StarShipSofa podcast.

Not is all good in the Robinson household, however, as Spider Robinson’s wife Jeanne is fighting cancer and they’re both struggling to pay the bills. You can help: 100% of any money used to purchase Larry Santoro’s excellent e-book, Lord Dickens’s Declaration, will go directly to the Robinsons. But you need to buy the book before December 31st, after which time it will become available.

In order to bring this fundraiser to an end with a bank, Matthew Sanborn Smith is calling on people to buy the book today. So click, click, click. The book is well worth a read and you have the additional bonus of having done some good for a fellow human being.