While in the garden recently, I found this guy on my corn. My limited insect identification skills are enough to know that it’s a grasshopper (watch me get corrected in the comments now 😉 ), but I have no idea as to what type.

More importantly, is it edible?

On a side note, attempting to identify bugs is something that I’m finding quite interesting even though I’m rubbish at it. If anyone can point to any relevant resources, it would be much appreciated.

With yesterday being the hottest day of the year so far, we decided to treat ourselves to a barbecue. And, of course, as soon as the food started to turn up, so did a wasp.

But how can I fault anyone who goes straight for the HP Sauce.

I almost opened the bottle for him.

I nearly forgot to mention yesterday that, as well as the berries and vegetables in the garden, William took it upon himself to attempt to grow an orange tree.

I helped him a bit with getting the seed to germinate and with potting it, but once it was warm enough for the plant to go outside, it has been entirely William’s responsibility.

I am under instructions to keep it an eye on it for the next week. Although most of the youth group activities the boys normally attend have been cancelled due to the corona virus lockdown, the restrictions were eased soon enough for them to attend the annual summer camp.

It’s a bit different to usual, of course, as the kids have to remain in contact bubbles so they are less able to freely mingle than usual. Also, the Sunday barbecue is cancelled, for obvious reasons.

As ever, the older kids make their own way to the site on Thursday and the following Sunday is when the younger groups are dropped off by parents. Normally this is quite a big event, with a barbecue, drinks and a chance to catch up with how things are going so far.

This year, there’s no barbecue, no mingling and no catching up with anyone. We had to turn up, drop the kids off and leave.

On the other hand, this did mean that Eve and I were able to hop on our bikes and go out for mussels. 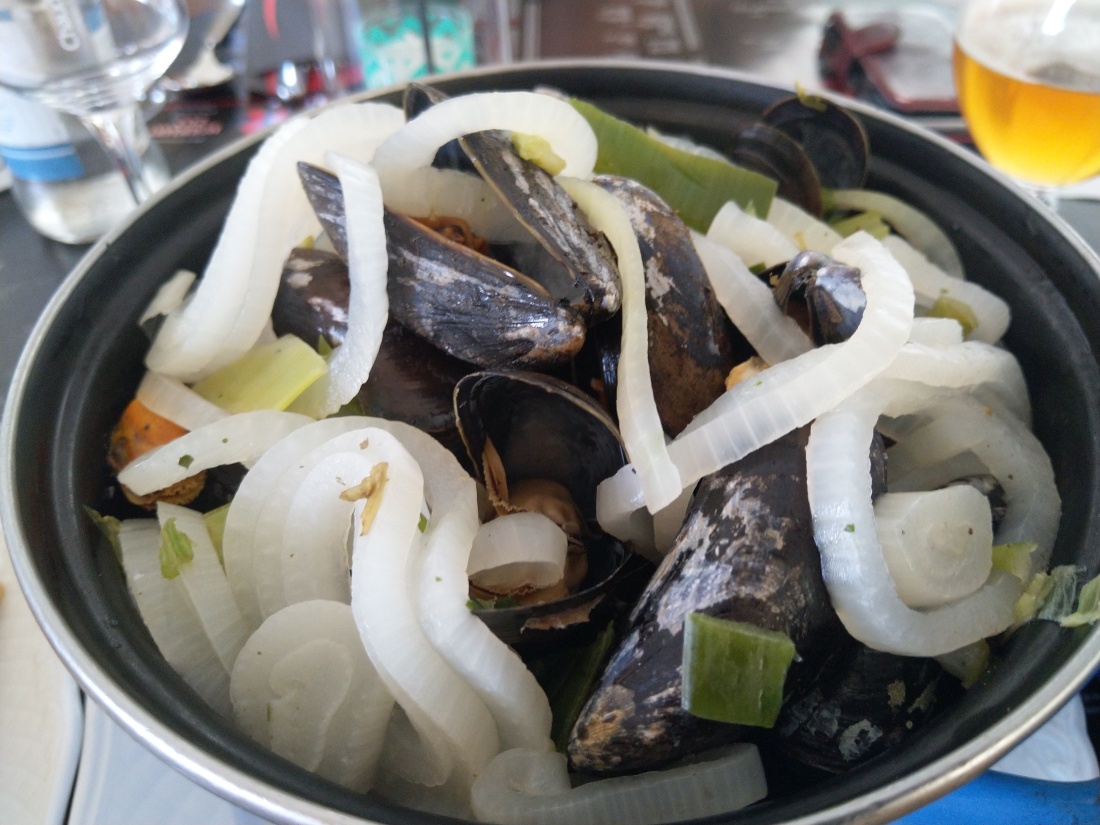 Next time, though, I will check the tires are properly inflated before we set off.

This is a bit of an addendum to yesterday’s post where I briefly mentioned that between the fun day out and the disaster of the drive in, we stopped for dinner.

The Takoda restaurant and ice cream parlour is located directly opposite Alden Biesen and appears to do quite a roaring trade. We’d booked a table and I was rather glad that we had when I saw that they were already having to turn people away at three o’clock in the afternoon. I suspect that they’ve removed about a third of their tables in order to comply with social distancing rules, but I was still surprised at just how quickly the restaurant filled up.

On the subject of viral changes, many restaurants are now using disposable menus. The menu is printed on a plain sheet of paper which can be simply thrown away once everything that can be ordered has been ordered.

The Takoda had a slightly different approach and, I have to admit, that I don’t know if this is in response to the coronavirus or if they’ve always done it like this. Instead of having a physical menu, there are a couple of QR codes on the table — one of them takes you to the main menu, the other to the desserts and ice-creams.

This approach works reasonably well if you have a decent internet connection and a QR code reader installed on your phone — everyone else had to borrow mine — but was undermined a bit once our orders were placed and the water reappeared with drinks and place mats. On the place mat was printed, of course, the menu.

The food, though, was superb. The boys all went for burgers (they had quite a variety) and the waiter was impressed that the twins had managed to eat everything placed in front of them. I was less surprised as the burgers did look spectacularly meaty — so much so that I momentarily wandered if I should have gone for the same. The mixed grill soon put that thought out of my mind, though, because it was glorious.

In fact, the food was so good that I decided to risk an Irish coffee. This is something which, when done well, is fantastic but which is so often no more than a coffee with a shot of whiskey and a blob of squirty cream.

Luckily for me, the Irish coffee at the Takoda is done very well indeed. So much so that I would be willing to go back for this alone.

Now I just need to find another excuse to go back to Bilzen.

As the lockdown restrictions continue to be eased in Belgium, cross border shopping is now permitted again, and has been since Saturday. A ministerial order went into effect allowing cross-border family visits and this also allows for cross-border trips to go shopping.

People still shouldn’t be taking day trips and should only cross border shopping should be restricted to essential items.

HP Sauce is available in The Netherlands, but hard to find in Belgium. It is most certainly an essential purchase.

Today’s date — 02/02/2020 — is a palindrome. What’s more, it’s a Palindrome in both European and American date formats, which makes it doubly special. We shall, of course, be celebrating with beer and pancakes.

That’s not entirely true. The local youth group organises a pancake day every year on the first Sunday in February, and every year we go along to support it — and eat unlimited pancakes. The fun starts at 3:00 this afternoon. Well, for the twins and I anyway.

Macsen has another karate tournament — something else that also always takes place on the first Sunday in February — so he and his mum will be joining us just as soon as they can.

We will probably be skipping dinner tonight.

It’s the national Week van de Friet, an initiative promoted by the Flemish Center for Agro- and Fisheries Marketing.

This year, even the statues are getting involved.

Wednesday evenings are becoming a struggle.

Last week the pizzeria was unexpectedly closed with no indication of why. We kept glancing at the site over the next few days and, although the opening times kept shifting around, by Tuesday it was looking like things were back to normal. So I took orders from the boys intending to pick up the pizzas on Wednesday evening while the boys were at karate.

Of course, with the moving opening times, I wanted to be sure so I checked the website while at work (at about 3:30pm) and it told me that they were going to open in half an hour. Things were looking good.

Things were looking better when I reached the station and found that, the first time this week, the train was both on time and not crowded. Things were looking so positive that I almost texted my partner to say everything was wonderful. Almost.

It was a good thing that I didn’t because she called me about five minutes after the train left the station to say that she had just checked the same site and the pizzeria was now closed.

I hadn’t realised just how loud my howl of existential despair could be until someone pulled the emergency brake and the conductor came running to seen who had died. (A slight exaggeration, I admit)

So plan B it was.

I don’t know what is going on. My guess is that they have some sort of staffing problem. It’s a small business with only two people working on any given day — one to take orders and make pizzas and the other to handle deliveries — so if one is off for any reason, they won’t be able to open.

We haven’t given up hope yet. While there are other pizzerias in the area, this one is the best by a long way. And they do a Wednesday discount which makes them very affordable as a regular event. But if this situation continues, plan B is going to end up being plan A.

I was talking to one of the twins this evening about why our Wednesday night pizzas have been cancelled and, while doing so, I opened up the pizzeria’s website to show him the opening days.

I was stunned to discover that they’ve changed their opening dates again. They are now closed on Tuesdays and Thursdays but, much more importantly, open on Wednesdays.

So I now have the boys orders and, tomorrow, I shall be making my usual trek and will find out if Wednesday night is still cheap pizza night.

We still have a stack of emergency pizzas in the freezer, just in case it all goes pear-shaped but I’m feeling optimistic and will be spending the rest of the evening doing my (potentially incredibly annoying) happy dance 🙂

I think I’ve mentioned before that Wednesday night is pizza night. I come home to an empty house on Wednesday evening because the boys are all at karate, and go straight out to the local pizzeria. By the time I return, freshly cooked pizzas in hand, the boys are changed, hungry and ready for the evening meal.

So, to yesterday and, as I was walking up the main street I was struck by the lack of a welcoming neon glow ahead of me. It wasn’t long before my worst fears were realised: They were closed!

After an emergency phone call to my partner and a quick detour past a supermarket (handily open until 7:30pm) we had a stack of frozen pizzas and the immediate crisis was averted.

It’s not unusual for restaurants locally to take a couple of weeks off during quieter times. I was a little surprised, though, that they didn’t have a notice up to let customers know when they would be back. So I looked up their website when I got home and it was here that the next bombshell fell.

They have changed their opening days.

They are no longer open on Wednesdays.

We are going to have go somewhere else for our Wednesday pizzas.