You can never have too many methods for making coffee, which is why I now have an Aeropress. I haven’t used it a lot, as yet, but I am quite impressed so far.

The device is similar to a cafetière (also known as a French press) in that you steep the coffee in water and then use a plunger to separate the grounds. The difference is that the plunger uses an airtight seal to push the coffee through a filter (which captures the grounds) straight into a mug.

The manufacturer claims that this brews an espresso strength coffee, which it probably does albeit a very small espresso.

The main selling point for the Aeropress, though, is the convenience it offers, allowing you to make a decent cup of coffee in about 30 seconds. You simply pour hot water over the coffee, stir, plunge and you’re done.

Cleaning it is a doddle, too — once you’ve plunged the used coffee into a bin, all that’s needed is a quick rinse and it’s ready to use again.

In terms of the actual coffee, it’s not bad. It doesn’t match the moka pot for the efficient delivery of a full flavour caffeine overdose, but it does make for a quick and decent cup of coffee that can be drunk throughout the day.

I need to experiment with the device a bit more, probably a lot more, but I can certainly see it becoming a welcome addition to my caffeinated lifestyle.

Many years ago, we treated ourselves to a new coffee machine. We have, in fact, been through several, but this one was a combined espresso and filter machine.

Trying to add too many functions to a single machine can be a mistake — especially when the machine in question was relatively cheap to start with — and so it proved with this one. The espresso part was okay, but the filter had an annoying tendency to leak all over the place.

Eventually we gave up on it. We replaced it with a dedicated filter machine and I treated myself to a stove top moka pot.

Since I had a bit of time yesterday I thought that now would be a good time to bring the espresso machine back out of retirement. Partly because it was there, but also so that I could make coffee without having to fight for stove space as mealtimes approach.

Now it’s all set up and working well. I will probably use it on occasion but nothing beats the moka pot when I want a really decent cup of coffee.

This is a bit of an addendum to yesterday’s post where I briefly mentioned that between the fun day out and the disaster of the drive in, we stopped for dinner.

The Takoda restaurant and ice cream parlour is located directly opposite Alden Biesen and appears to do quite a roaring trade. We’d booked a table and I was rather glad that we had when I saw that they were already having to turn people away at three o’clock in the afternoon. I suspect that they’ve removed about a third of their tables in order to comply with social distancing rules, but I was still surprised at just how quickly the restaurant filled up.

On the subject of viral changes, many restaurants are now using disposable menus. The menu is printed on a plain sheet of paper which can be simply thrown away once everything that can be ordered has been ordered.

The Takoda had a slightly different approach and, I have to admit, that I don’t know if this is in response to the coronavirus or if they’ve always done it like this. Instead of having a physical menu, there are a couple of QR codes on the table — one of them takes you to the main menu, the other to the desserts and ice-creams.

This approach works reasonably well if you have a decent internet connection and a QR code reader installed on your phone — everyone else had to borrow mine — but was undermined a bit once our orders were placed and the water reappeared with drinks and place mats. On the place mat was printed, of course, the menu.

The food, though, was superb. The boys all went for burgers (they had quite a variety) and the waiter was impressed that the twins had managed to eat everything placed in front of them. I was less surprised as the burgers did look spectacularly meaty — so much so that I momentarily wandered if I should have gone for the same. The mixed grill soon put that thought out of my mind, though, because it was glorious.

In fact, the food was so good that I decided to risk an Irish coffee. This is something which, when done well, is fantastic but which is so often no more than a coffee with a shot of whiskey and a blob of squirty cream.

Luckily for me, the Irish coffee at the Takoda is done very well indeed. So much so that I would be willing to go back for this alone.

Now I just need to find another excuse to go back to Bilzen.

Domesticated by Timothy Bastek is a zombie story that reminds me of the fact that I never got around to seeing Fido.

Denzil delves into the strange history of Neutral Moresnet.

Tremors recently turned 30. Jennifer Ouellette celebrates the most perfect B movie creature feature ever made.

First it was wolves, now it is otters. Thirty years after they were declared extinct in Flanders, the animals have started to make a comeback. There’s still a long way to go, but things are looking positive.

Jamie Foster and Christopher H. Hendon explain how to make the perfect cup of coffee – with a little help from science.

With Thursday being a public holiday, we took a trip to the Netherlands to visit Apenheul, a zoo of free roaming primates. It’s exactly what it says it is and is really rather good.

What you have is essentially a large forest, through which you follow a path allowing you to see the animals close up and in a pretty-much natural state. This is particularly true of the smaller monkeys which can, and do, come very close to visitors. Larger apes, such as gorillas and orangutans are a little more separate, being housed on islands that put them a bit more out of reach.

We turned up at about 11:30 intending to eat first and then explore. It didn’t quite work like that because as soon as the boys saw the monkeys, and realised just how close they would come, all lunchtime thoughts were forgotten. It took us two hours to make it to the restaurant and, by the time the zoo closed at 5:00, we still hadn’t seen everything.

It took us two hours to get there, which isn’t too bad, and the boys are all keen to go back. If (when) we do, however, will will probably leave a little earlier and try to find some food on the way as the food in the zoo is not that substantial — it’s all chips and sandwiches which is fine for a snack but not much of a meal.

That said, there is a restaurant — De Boschvijver — close to the car park, and it turned out to be very nice indeed. The outside terrace, especially, provides a great opportunity to enjoy dinner while looking out over a lake.

Apenheul is also involved in several nature conservation projects around the world through their Apenheul Primate Conservation Trust (APCT). Being a big coffee drinker, the Yellow-tailed woolly monkey project is the one that appealed to me most.

By providing local people with a sustainable way of producing coffee, we get their support for our conservation goals. Farmers who previously had to cut down hectares of the forest for their livestock, now only need a one hectare coffee plantation to generate enough income. We buy this coffee at a fair price and then serve it to our visitors!

The coffee is called Lazy Monkey, and it’s pretty good.

This is me… Every morning

I don’t think I need to add anything here…

It’s been a long weekend over which we have enjoyed one of the smellier parts of parenting, and one of those parts that no-one reeally talks about. But we’ve made it and I am now heading to work where I can enjoy the comparative peace of only having to deal with three simultaneous disasters.

So here’s a video tribute to the greatest drug ever discovered. I have the feeling that I may be getting through quite a lot of this today.

I’ve seen this floating around the interwebs a few times now. I don’t know where it originated, but it does raise a smile every time I see it. 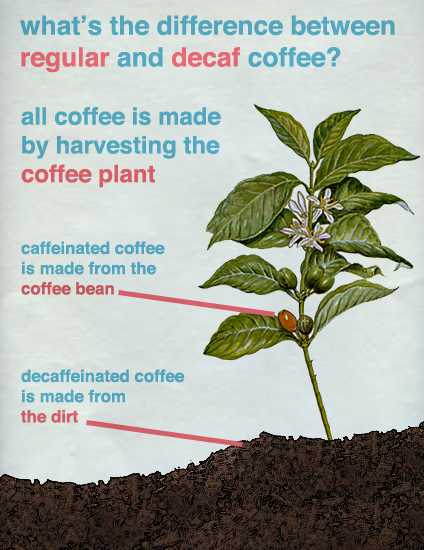 So after the beer, we went on for dinner. And when you’re in a French restaurant in Antwerp, what better way to round off the meal than with an authentic Irish coffee.

The blue flash in front of the chef is the flame…