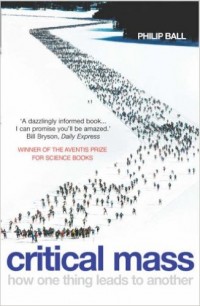 Following on from Thursday, I was reminded of the last book I read on the subject of economics. That said, Critical Mass by Philip Ball goes beyond just economics and takes in a whole range of social sciences and delves into why these areas of study so often get things wrong.

Ball, a physicist by training and a former editor for Nature, makes the case that these subjects should focus on the behaviour of systems, rather than trying to extrapolate from individual behaviour as is so often the case. He starts by laying the groundwork and then works through a series of examples in which his approach has been successfully used.

It’s been a fair few years since I read this (my copy has a printing date of 2007) but the core point – that people are random and unpredictable individually, but highly predictable in groups – is one that has stayed with me and still appears to hold true.

I’d recommend it and I’m highly tempted to go back and read it again.